In 2018, Scholarship Prep Charter School in Santa Ana, California, had a banner year for student achievement in math and English language arts (ELA).

Of all the schools in the state, Scholarship Prep boasted the highest year-to-year percentage growth in students’ meeting or exceeding the Common Core State Standards on the statewide math assessment, Smarter Balanced. On the ELA test, Scholarship Prep ranked 45th of 10,634 schools—or in the top 1 percent—on the same metric, based on the school’s analysis of statewide data from the nonprofit EdSource. 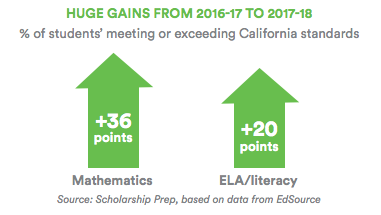 Scholarship Prep is part of a larger network of charter schools that added a second school last year and plans to add a third this coming fall. All are committed to providing “a university-inspired pathway of success while closing the achievement gap for all students, including foster youth and those underserved.” The network’s co-founders are Jason Watts and Gloria Romero, the former Democratic majority leader of the California State Senate and a longtime advocate for educational excellence and innovation.

Indeed, it was the promise of innovation that helped Chief Academic Officer Andrew Crowe convince his colleagues to adopt both Eureka Math and Wit & Wisdom three years ago. From his previous work in other charter organizations, Crowe was familiar with the predecessors of both curricula: EngageNY Math and the Wheatley Portfolio, respectively.

Initially, though, not all of Crowe’s teacher colleagues were won over by the curricula’s unique approach. “For some, it was a culture shock not to have a traditional textbook,” he says.

But when Crowe showed them Eureka Math’s in-depth modules and units and reminded them that charter schools are supposed to innovate and disrupt traditional approaches, they bought in.

The positive ratings from the independent nonprofit EdReports.org were also a key selling point.

The strengths of Wit & Wisdom, Crowe says, include the front-loaded vocabulary, writing rubrics, and engaging books that inspire students to find textual evidence to support their answers. The curriculum also helps improve teachers’ abilities to incorporate multiple texts (primary and secondary, fiction and nonfiction) into one lesson or assessment.

Crowe says Wit & Wisdom has been particularly beneficial to the foster youth at Scholarship Prep as well as to English learners who are new to the United States. The students respond to the culturally relevant and real-world material in the curriculum, especially books focused on resilience, courage in crisis, and teens as change agents. (Scholarship Prep’s charter includes a special mission to serve youth in foster care who are typically underserved, a phenomenon documented in a recent article in The 74.)

The rigor of Wit & Wisdom requires some adjustment for teachers at first.

Instead of working from a single textbook, teachers have to learn to use a more diverse reading list with a mix of fiction and nonfiction. But, Crowe adds, teachers love the richness of the new materials.

Another challenge is finding the time to cover all the material. As a result, Crowe says, he and the faculty have customized the modules to focus on the most important content. The curriculum is designed to allow teachers that flexibility.

The schools offer a range of professional development, including two-week sessions in the summer and monthly sessions and cross-grade professional learning communities throughout the school year. Crowe is particularly proud of the school’s partnership with the Orange County Department of Education, which trains faculty from both Scholarship Prep and traditional public schools on the curricula.

“You rarely see charter schools working with their authorizer and traditional district schools,” he says.

Classroom teachers play a central role in training new teachers, Crowe says. That’s because they believe in the curricula and want all students, especially those entering their classrooms from lower grades, to master its concepts and strategies.

“Our teachers are bought in and want to be the ones who train new teachers,” Crowe says.

Crowe, like his peers in other districts, says that teachers appreciate the materials the more they use them.

“They see how thoughtful and intentional both Eureka Math and Wit & Wisdom are. And then they saw the huge jump in achievement—number one in the state,” he says, adding that that success reinforced teachers’ enthusiasm and commitment.

Students also welcome the increased rigor. “Eureka Math has helped students see math as connected from year to year,” Crowe says. “Wit & Wisdom has helped show students that there are themes across multiple sources that can be used to pull out greater meaning.”
---------------------------

To request information about how Eureka Math and Wit & Wisdom can help boost student achievement in your school/district, contact us.

"They see how thoughtful and intentional both Eureka Math and Wit & Wisdom are. And then they saw the huge jump in achievement—number one in the state."