It’s amazing how the right curriculum can change the way students learn, interact, gather knowledge, and make connections. Even for teachers who have been in the classroom for many years, the difference in student learning is clear when a new, knowledge-rich curriculum is put into place.

We sat down with three Grade 2 ELA teachers from Dogwood Elementary School in Germantown, Tennessee—Beth Bittner, Mallory Goodrich, and Kara Lowe—to discuss the impact that Wit & Wisdom has had on their teaching as well as their students’ reading, writing, speaking, listening, and more. 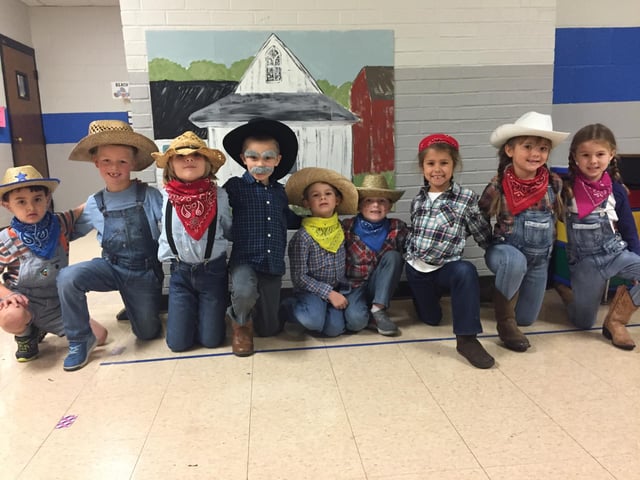 Kindergarten students at Dogwood Elementary enjoyed a farm-themed dress-up day to celebrate the culmination of Module 2, Once Upon a Farm.

What would you say has been the most surprising thing that you've seen thus far from your students with Wit & Wisdom?

Lowe: The first thing would be the level of engagement that the kids have right now. We just finished Separate Is Never Equal. [Even] with it being so much above their level, they were still able to really engage with the book and learn a lot. The second thing, I think, would be the writing. The writing that we do is shocking. The way that Wit & Wisdom guides the students in the writing process makes it so much easier for them because we take them step by step. And the books … help inspire the writing.

Goodrich: I really like that Wit & Wisdom gives a lot of opportunity for kids to discuss with each other, as opposed to just with the teacher. I've seen my kids really grow. They've learned how to give each other feedback and accept criticism, and work that in when they're doing their writing and their speaking.

Bittner: I think their writing, and what Kara was saying—how they are so engaged in the story. When you're reading The Buffalo Are Back and they get to the part … where the buffalo are about to go off the cliff, and [then] they run them off the cliff … they're into it. Because they feel strongly and they’re into it, they want to write instead of [saying], "I don't know what to write." Because you review those stories, and the level of questioning, they're able to put it to paper [when] it's time to write.

Have you noticed a shift in your own teaching practice because of how the strands (e.g., reading and writing) are integrated throughout the curriculum instead of being taught separately?

Lowe: For me, absolutely. It's given new life to everything I do in the classroom. And I love the fact that it incorporates social studies ... so the students are just getting a good, well-rounded exposure to history.

Goodrich: For a long time, I struggled to find a good balance between my teaching reading and teaching writing. And I think it's already built into Wit & Wisdom, which is part of what makes it such a great program. And along the lines of what Kara was saying, we can tie in a lot of social studies. We're finishing up Module 3 … Civil Rights Heroes, and we've also been doing research on famous African Americans for Black History Month. So, it all comes together, and the kids are making connections. It makes it real for them.

You talked a little bit about the academic discourse, or the speaking and listening component, and how there’s been a change in your students there. What are some things that you’re hearing them say?

Goodrich: We’re seeing talk of, “I agree because ....” That’s the whole series of telling your “why,” and backing it up with evidence from the book. Students can explain why, from their own reasoning, and not just, “This is my answer.” They’ve also improved in listening to one another and having reasons and being okay with, “We may not agree, but let’s say … why.” That’s an adult skill that they’re learning at a pretty young age. I thought that was a really a neat thing.

Bittner: And everyone’s getting their opportunity to be heard and … express their opinion.

Has there been a favorite book for you or your students thus far?

Bittner: For me and for my students, The Buffalo Are Back was a favorite. I had never read that book before I started teaching Wit & Wisdom, and when I read it, it just blew my mind. It’s one of my favorite books I've ever read as an educator. And my kids could tell that I was so excited to read this book and was really into it, so they really enjoyed it, too.

Lowe: I love Sky Tree as well, during the first module.

In the timeline, our students really have a full understanding of the history. We kept the timeline up for so long, and honestly, if I had the opportunity and a space in my room, I'd leave it up the entire year—because the children can … really grasp the understanding of a timeline and when things happened in history. And they were starting to relate other things to that as well, things that happened that they've learned about like, say, 1947 versus 1963. They're listening as one of those dates are brought up, and they say, "Oh, that's when this and that happens." So, it's really been pretty spectacular.

Goodrich: Right. And just to build on that, I remember when we started the Civil Rights module and we were talking about the time that this was happening in history. A lot of my kids [said], "Well, remember when we did the timeline with the Westward Expansion? When is this on that timeline?" So, we pulled the timeline back out and put it up and [said], "Well, here's all the stuff from The Buffalo Are Back and Johnny Appleseed. Let's look and see when Martin Luther King and the March on Washington happened." So, they retain that knowledge. You can use a timeline to figure out when things in history have occurred, and they've brought that back to this module. It's not even in the curriculum, but the fact that they made that connection was just amazing.

Based on the improvements in student engagement, discussions, writing, and connections to prior knowledge, there is no denying that big changes are taking place for Beth, Mallory, and Kara and their students since implementing Wit & Wisdom. “[The] growth we've seen just this year—it's phenomenal,” said Kara. We can’t wait to hear more stories of how students and teachers continue to grow with Wit & Wisdom.

This interview has been edited for clarity and concision.

Dogwood Elementary School is a K–5 school within the Germantown Municipal School District in Tennessee.

Beth Bittner is a Grade 2 teacher at Dogwood Elementary School. This is her nineteenth year teaching. She has taught kindergarten and third grade previously.

Kara Lowe is a Grade 2 teacher at Dogwood; this is her eighth year of teaching.